Greeley has a long history of investing in its water future. The foresight and diligence of past city leaders and water pioneers ensured Greeley continuously seeks opportunities to plan for, and secure, Greeley's water needs. 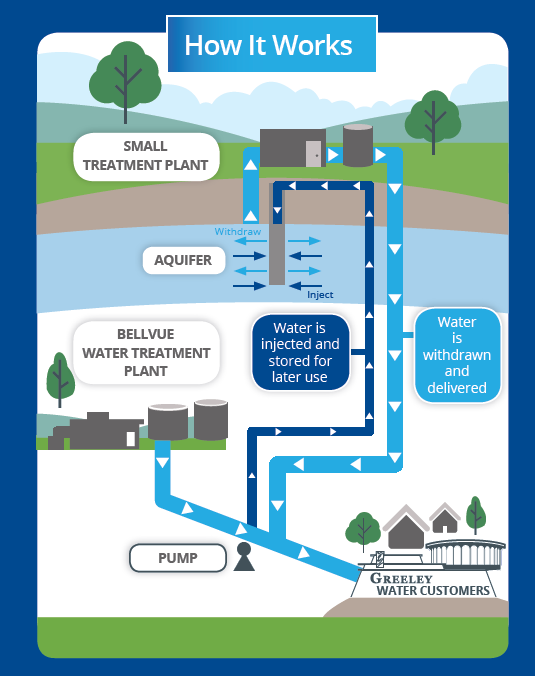 The proposed Terry Ranch Water Project is an innovative water supply and storage project being considered and evaluated to help fulfill the water needs of Greeley's growing population. If ultimately determined feasible and approved by the City of Greeley Water Board and City Council, this generational project will be another step forward to ensure the City of Greeley's long-term future water security.

The City of Greeley has an extensive water system that includes two treatment plants, seven reservoirs, four river basins, and over five hundred miles of pipeline. These systems make up Greeley's reliable water supply. Through diligent planning and foresight, Greeley has made many strategic investments to ensure the city is well-positioned for short and long-term water needs. Today, ensuring a reliable water supply in the face of anticipated population growth and the consequences of a variable climate requires the same level of investment in innovative thinking and strategic planning that has positioned Greeley to date. 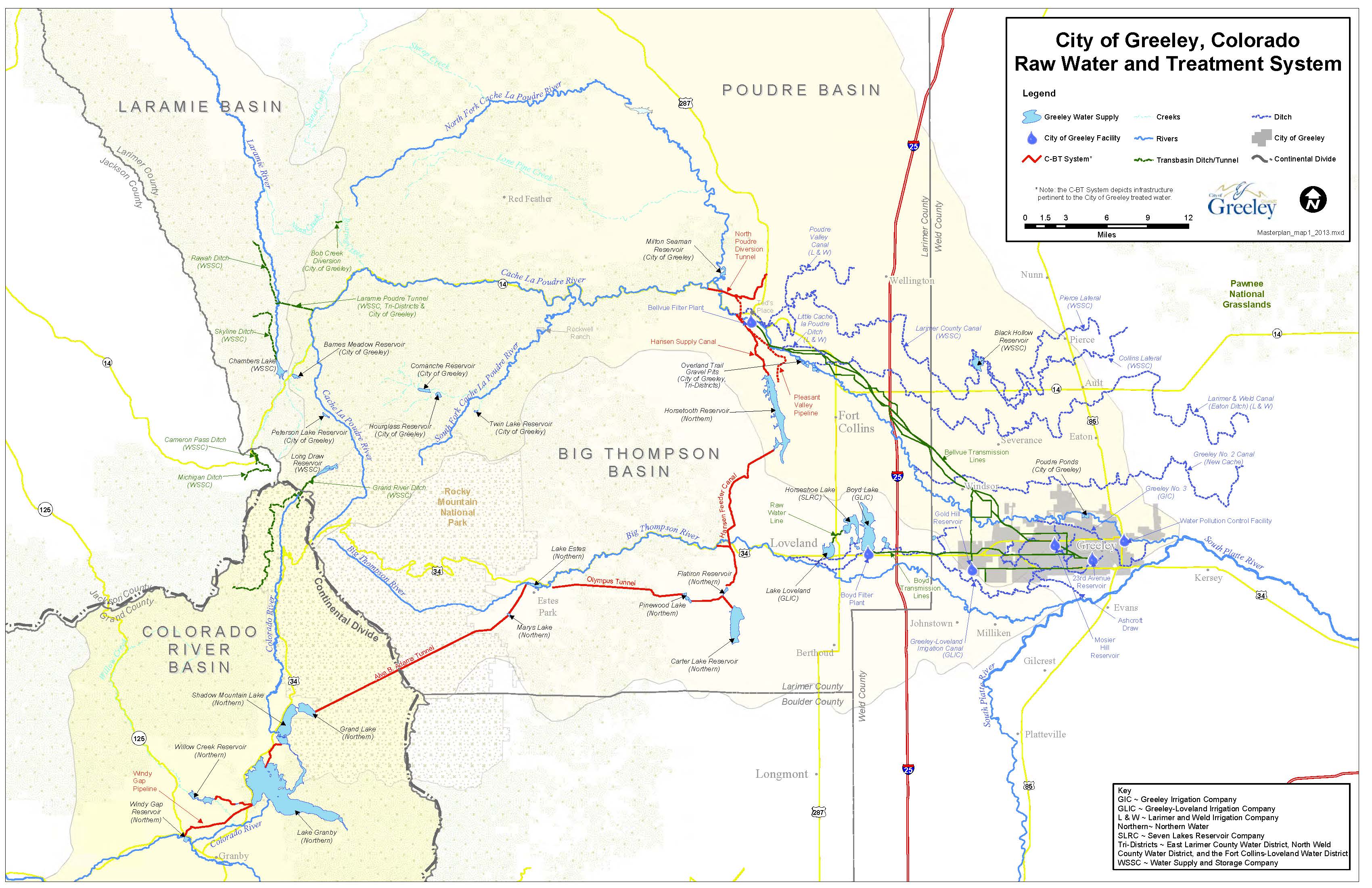 The Terry Ranch aquifer was identified as a viable water storage option during the city's long-term strategic efforts to enlarge Milton Seaman Reservoir. Since 2003, the city sought to enlarge the existing Milton Seaman Reservoir. Enlarging this reservoir on the North Fork of the Cache La Poudre River requires a variety of federal, state, and county permits. The city has been engaged in the federal National Environmental Policy Act permitting process to allow the reservoir's expansion since 2006. Federal permitting has been a long, arduous, and expensive process, and final authorization is uncertain.

As part of permitting for the Milton Seaman Reservoir enlargement, Greeley is required by federal agencies to evaluate other, less environmentally damaging alternatives. It was during this continuous evaluation process that Terry Ranch was identified as an alternative solution.

About the Terry Ranch Project

For comparison, the entire City of Greeley currently uses about 25,000 acre-feet per year. Non-tributary means this groundwater is not connected to surface streams and reservoirs and is instead solely an underground water source. Unlike most groundwater used in and around Greeley, non-tributary groundwater is deeper, and can be used and reused many times. The two sources, non-tributary (underground) and traditional above-ground sources (reservoirs), diversify the city's water supply and acquisition.

A key feature of the project will be the use of the aquifer to store treated surface water. Greeley would not pursue this project if it were to only extract a single use source of groundwater. Rather, the city's long-range plan is to inject and store water from surface sources underground for later use. The Terry Ranch aquifer is well suited for injection, and the State of Colorado has rules and regulations that guide this approach to aquifer storage and recovery (ASR). Additionally, the city can develop its use of the water and its capacity for recharge of the aquifer incrementally over time to match customer demands

Greeley does not currently own this groundwater or the associated aquifer storage and has developed an agreement to acquire ownership of the water and storage rights from the owners, Wingfoot Water Resources (Wingfoot).

The city is using an innovative, low-risk purchase arrangement to acquire this water and storage. Rather than paying money upfront, the city is issuing the seller, Wingfoot, water supply credits.

Each credit will be worth one acre-foot of water supply redeemable to meet the city's raw water dedication requirements – payments in the form of water or cash required of developers or builders to construct in the city. The water supply credits are only redeemable within the City of Greeley. Wingfoot will benefit by being able to sell credits to developers and builders.

Greeley benefits by not having to pay for the project all at once. This arrangement shares financial risks between the City of Greeley and Wingfoot, which results in lower water rates for Greeley water customers.

Wingfoot will not own or operate the Terry Ranch Project. In addition to providing Greeley full control of the groundwater and groundwater storage rights, Wingfoot will provide $125 million toward construction of the project infrastructure.

Research to date shows the Terry Ranch Project to be a promising opportunity for a high-quality water source and with fewer environmental impacts, less permitting risks, and an overall lower cost than the Milton Seaman expansion.

Before finalizing the purchase, Greeley is conducting extensive testing and analysis, including drilling additional wells and collecting extensive water quality data. Critical analysis will be peer-reviewed, and the results of these studies will be available in early 2021.  The Water and Sewer Board and Greeley City Council, with input from Greeley residents, will weigh results to decide whether to move forward with the purchase.

Expand all Collapse all

What is the Terry Ranch Project?

The Terry Ranch Project is an underground water supply and storage project that could provide Greeley 1.2 million acre-feet of water to meet the needs of the city’s growing population. Greeley is purchasing a decreed non-tributary groundwater right along with rights to store water in the aquifer. Greeley will not own the land surface, but will be allowed to use the surface to develop the groundwater.

No, however Greeley Water and Sewer Board signed a preliminary purchase contract in June 2020. That contract gives the city up to seven-months to conduct diligence (testing and analysis) on the project and two months to decide whether to close. Results of diligence investigations will be used to help city leaders and staff make an informed decision.

How is the Terry Ranch Project different from the Milton Seaman Reservoir enlargement project?

If approved the Milton Seaman project would meet the city’s water need. However, it requires extensive permitting and comes without a definitive timeframe for completion. The city has already invested nearly 15 years of time and resources in permitting for Milton Seaman. The work already completed on the Milton Seaman project led to the identification of the Terry Ranch Project. If it is determined that the Terry Ranch Project is not a viable option, the permitting work will be resumed.

Why else is the Terry Ranch Project better than the Milton Seaman Reservoir enlargement?

Both projects would provide Greeley its needed water supply and storage. However, the Terry Ranch project is less expensive and much more certain than the Milton Seaman Reservoir enlargement. Greeley’s ability to secure required federal, state, and county permits for constructing the Milton Seaman enlargement is uncertain.

What about the resources already put into the Milton Seaman reservoir project?

Despite the time and expense, the city has yet to receive any of the permits needed to enlarge Milton Seaman Reservoir. Enlarging Milton Seaman Reservoir will cause various environmental impacts, impacts that federal, state, and local authorities are evaluating.  Greeley will be required to provide costly mitigation for any identified environmental impacts.

The time and money put into the Milton Seaman reservoir project was to acquire necessary federal permits. These permits required the city to look into alternative water supply and storage options. The Terry Ranch Project was identified through the federal permitting process for the Milton Seaman enlargement. The money spent to support the Milton Seaman project also produced a very large amount of useful information that the city continue will use to plan for the future and to protect its water resources.

Is the water safe? What do you mean by diligence?

Early information indicates that, yes, water from the aquifer would be safe. The current diligence phase is specifically intended to confirm and assure Greeley water users the water will be safe. Diligence means conducting investigations to verify the project is safe, reliable, and can be cost effectively built. Greeley has assembled a team of experts to conduct these investigations, which include: testing groundwater quality for more than 100 compounds; drilling two test wells for hydrogeological testing (in additional to the five wells already drilled); evaluating the water quality impacts of mixing surface water with groundwater and the aquifer materials; confirming pumping rates; assessing environmental conditions including wetlands, endangered species, and cultural resources; and completing a preliminary design and cost estimate. It is essential that the city ensures the Terry Ranch Property water is safe for use and every possible test is being used to make sure this water is a good investment. The Greeley City Council and Water Board will review diligence results when deciding whether to finalize the purchase.

Wingfoot Water Resources is a private company that developed the groundwater rights of the Terry Ranch Project. In 2017, Wingfoot received a Water Court Decree for the 1.2 million acre-feet of groundwater. Wingfoot also assembled the various surface rights to develop the water and drilled the first five production wells on the site.

What about uranium? Will the water be safe to drink?

Current information suggests Terry Ranch groundwater is excellent quality. It does, however, contain small amounts of naturally occurring uranium. Uranium is wide-spread in groundwater in Colorado and the western U.S. Uranium can be fully treated, and Greeley will remove all uranium from the groundwater before delivering the water to Greeley.  Removing Uranium is a common practice in water. There are proven technologies for uranium removal in water. Water quality, and specifically, uranium are a focus of diligence activities.

What is the cost of the Terry Ranch project?

Very preliminary estimates are that the Terry Ranch Project will cost $250 million. Of this amount, Wingfoot will contribute $125 million. The city is currently completing designs that will be used to refine these very preliminary cost estimates.

How will Greeley pay for the groundwater and underground storage?

Rather than paying money upfront, the city is issuing the seller, Wingfoot Water Resources (Wingfoot), water supply credits. Each credit will be worth one acre-foot of water supply redeemable to meet the city’s raw water dedication requirements – payments in the form of water or cash required of developers or builders to construct in the city. The water supply credits are only redeemable within the City of Greeley. Wingfoot will benefit by being able to sell credits to developers and builders. Greeley benefits by not having to pay for the project all at once. This arrangement shares financial risks between the Greeley and Wingfoot, and will result in lower water rates for Greeley water customers. Wingfoot will not own or operate the Terry Ranch Project. 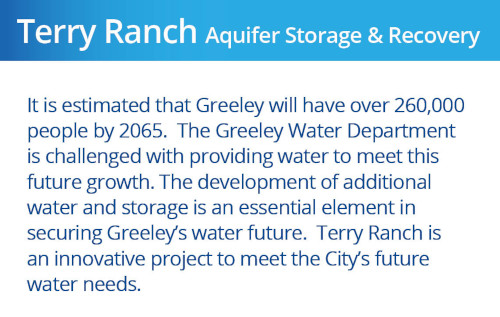